Since the beginning of May 2018, the Kilauea volcano on Hawaii has been erupting. First a cloud of fragmented older lava, volcanic ash and vapor rose from the Pu‘u ‘O‘o crater on the summit, magma then migrated to the flanks, opening a series of fissures from where now lava is pouring out.

Around five weeks into the eruption, some residents of the town of Kalapana reported small, green crystals to be found on the ground, soon speculating that the crystals rained out from the eruption column or the lava fountains of Kilauea. The green crystals are olivine, a very common magnesium-iron-silicate mineral to be found in magmatic rocks. Olivine crystals of high quality are used also in jewelry but Hawaii olivine is too small and broken to be used as gemstone.

Single olivine grains and larger aggregates can be found as inclusions in basaltic lava. Olivine crystallizes at 1,200-1,900°C but basaltic lava has a temperature around 1,115°C, so even in the still molten lava first crystals of olivine start to form. Olivine is also a relative hard mineral, so it tends to erode out from the weathered cooled lava. Along Hawaii’s Papakolea Beach the waves and tides have worn down the lava rocks and accumulated olivine grains, coloring the entire beach green.

Olivine sand from the Papakolea Beach on Hawaii: As for the olivine discovered near Kalapana, about 20 km distant from the active lava fissures, nobody actually saw the crystals falling from the sky. Cheryl Gansecki, a geologist at the University of Hawaii’s Hilo campus on the Big Island, has now confirmed at a U.S. geological survey briefing that the crystals are likely not associated with the ongoing eruption.

Michael Garcia, a professor of geology at the University of Hawaii’s Manoa campus in Honolulu, and his students have studied older lava deposits of Kilauea, including the lava flows of the 1983 eruption. The fresh olivine found in this lava is greenish-gray, not shiny and bottle-green as seen in photos published online. The olivine becomes full green only over time, as the crystals are exposed to weathering.

Single olivine crystals inclusions in a piece of Hawaiian scoria: So the green crystals found near the fissure eruptions are likely not associated with the ongoing eruption, as they display not the fresh color of Kilauea’s olivine, but olivine crystals weathered out from old lava rocks. 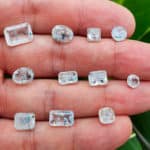 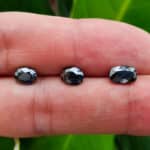 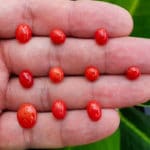 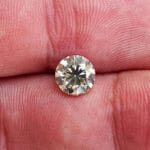 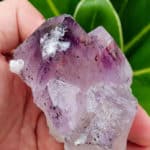 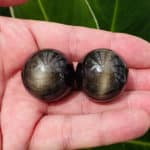